Earlier in the day Dr. the Hon. D. Orlando Smith, Premier and Finance Minister of the BVI, addressed a gathering of 130 Chinese entrepreneurs of the General Association of Zhejiang Entrepreneurs.

Dr. Smith outlined for the entrepreneurs innovations that the BVI is undertaking, such as the new Limited Partnership Act, the new Micro Business Company, and the Bank of Asia, the BVI’s bank in the cloud. “I am delighted to be here,” Dr. Smith told the gathering. “Hangzhou has become famous as the home of Jack Ma, founder of Alibaba, and is equally famous as China’s Silicon Valley.”

During the past two weeks members of the BVI Trade Mission delegation, led by Dr. Smith, have held productive meetings with government officials and business leaders, and hosted BVI Asia Conferences in Hong Kong, Singapore, Beijing and Hangzhou. “Our meetings in Hong Kong and Singapore strongly demonstrated a continued level of interest in the BVI, “ Dr. Smith said. “I am pleased that we have also had productive meetings in Beijing with the Ministry of Foreign Affairs, the Ministry of Commerce and the China Friendship Association, all of whom welcomed the several developments in the BVI that will further the economic relationship between BVI and China.”

In Hong Kong during the first week Dr. Smith and delegates toured the offices of BOA Financial Group, which is chaired by Mr. Carson Wen. The BOA Financial Group of Companies was formed to provide financial services in a cost efficient, technology driven and user-friendly manner to customers around the world. The delegation also met with Andrew Heyn, British Consul General in Hong Kong, and with Mrs. Carrie Lam, the Chief Executive of the Hong Kong Special Administrative Region.  The next day the first BVI Asia Conference was held at the Island Shang-gri La Hotel, followed by a reception hosted by Mr. Wen in honor of the BVI delegation’s visit to Hong Kong.

From Hong Kong the BVI Asia Trade Mission travelled to Singapore, where delegation members enjoyed a day and a half of high-level briefings and presentations from digital and fintech leaders, including several “fintech immersion” briefings. 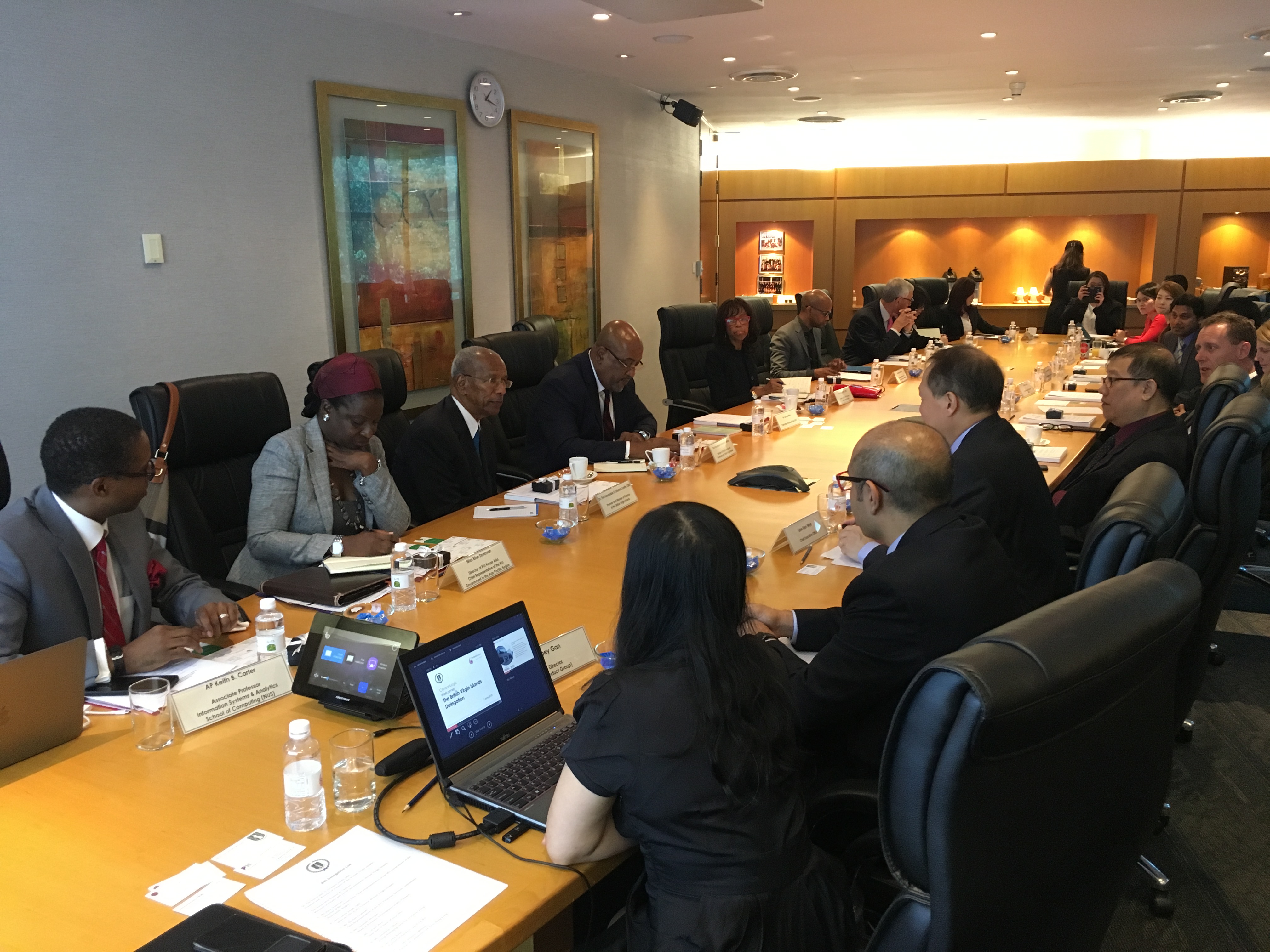 Next stop for the delegation in Singapore was the National University of Singapore, where members toured the university’s incubation facility set up to allow students to test ideas with support provided by the university’s legal and administration team.  The delegation’s host at the university was Associate Professor Keith B. Carter. Professor Carter said that the best companies are built around data, and that more jobs will be created than ever before because of technology.

From Singapore the BVI delegation travelled to Beijing, where Dr. Smith and the delegation met with Madame Li Shaoling, president of the Chinese People’s Association for Friendship with Foreign Countries and discussed expanding Chinese tourism to the BVI. Later in Beijing Ms. Elise Donovan, Director, BVI House Asia in Hong Kong and Mr. Wen signed a memorandum of understanding with the Chairman and CEO of the China Association of Small and Medium Enterprises (CASME) to develop a business relationship between CASME and BVI. With seven million members CASME is one of China’s most influential business organizations.

At each BVI Asia Conference, which has attracted on average more than 100 attendees, delegates have covered topics such as the BVI Advantage, the opening of Bank of Asia in BVI, new BVI products such as the Micro Business Company Act, the new Limited Partnership Act, and how the BVI can become more involved with the Belt and Road Initiative, a multibillion dollar project introduced by the Chinese government.

Following today’s events in Hangzhou mission delegates will travel on Thursday to Shanghai for the final BVI Asia Conference.

BVI Finance is the voice of the British Virgin Islands’ financial services industry; marketing and promoting its products and services, as well as managing and maintaining its excellent reputation as a premier international business and finance centre. BVI Finance was incorporated as a company limited by Guarantee in December 2016 and since then has operated as a public private partnership. BVI Finance maintains a strong relationship with key stakeholders including Government and its many partners locally and internationally, media outlets and investors in emerging and traditional markets. To learn more about the British Virgin Islands' financial services, www.bvifinance.vg.

BVI House Asia, based in Hong Kong, was established as the BVI Government’s Representative Office in Asia to support and expand the strong relationship that the BVI has had with the Asia Pacific region for more than 25 years. BVI House Asia allows the BVI Government to be responsive in real time, providing information about BVI business, and working with industry practitioners to increase knowledge and awareness of business opportunities, especially in the financial services industry. For more information about BVI House Asia, please visit www.bvihouseasia.com.hk.