1) Why the BVI branch in Hong Kong?

To further facilitate the dialogue between the industry in Asia and the BVI and to support the robust growth and economic opportunity for people and businesses across Asia, the BVI launched its Asia-Pacific branch in Hong Kong in September 2013: BVI House Asia.

2) Why is the BVI popular among Asian clients?

Because the BVI has worked with Asian businesses for over 25 years, Asian clients have come to know, depend on and trust the BVI to handle their wealth and international business needs.

Additionally, BVI companies are chosen for their minimal regulatory interference and high level of corporate flexibility, such as for mergers and acquisitions and cross-border transactions.

3) What has been the impact of the BVI on Asian economies?

Throughout Asia’s incredible growth over the past 25 years, the BVI has played an indispensable role in helping Asian businesses, individuals and economies achieve financial success.

By using BVI companies that are flexible, tax neutral and secure investment vehicles, Asian businesses have gained access to capital and a pool of sophisticated international investors. The BVI’s important role in structuring investment into Asia is particularly evident when looking at levels of foreign direct investment (FDI) into the region:

Indonesia: in the first quarter of 2011, inward FDI into Indonesia through the BVI amounted to US$200 million in respect of 30 different projects.

Singapore: the BVI was the third largest FDI source into Singapore in 2012, contributing US$4.74 billion, 7.9 percent of total FDI into Singapore.

Taiwan: the BVI provided about US$1 billion (or 25 percent) of total inward FDI into Taiwan in 2010.

Vietnam: between 1988 and 2012, the BVI was responsible for US$15 billion (or 7.1 percent) of all inward FDI into Vietnam, which represented investments into over 510 projects.

In China, the BVI plays a major role in FDI. Statistics show that China’s outward and inward FDI flows through the BVI have continued to increase in spite of the global financial crisis. While major economies struggled, China continued to experience growth, and Chinese business leaders chose the BVI as a facilitator for this growth.

Today, trends show that China’s outward investment is set to overtake inward investment within two to three years. Outward Chinese investment grew by an average annual rate of 45 percent between 2002 and 2011, and in 2013, swelled to US$101 billion, making China the third largest investor in the world. The BVI has continued to be the chosen partner for Chinese cross-border investment, highlighted by the fact that it is the fifth largest recipient of China’s outward direct investment as of 2012.

The fact that BVI companies are used for such diverse purposes – as listing vehicles, joint venture companies, asset holding companies and open and closed-ended fund vehicles – highlights the role and sustainability of the BVI as a stable, flexible and leading international finance centre in an increasingly complex and evolving global financial system.

4) What services does the BVI offer to the Asia market?

The BVI is the jurisdiction of choice for Asia, due to its innovative, cost effective and trusted structures and processes that have been utilised by Asian businesses for over 25 years. Its financial services offerings make the BVI the complete offshore finance solution, and consist of:

5) How are BVI companies used in Asia?

Over the past 25 years, the BVI has become a tried and tested conduit for overseas capital entering Asia, offering tax efficiency, legal certainty, and general ease of doing business. Investors benefit from British-based law, a wide pool of professional service providers, local creditor friendly legislation, and an effective judicial system of registering charges.

“A group of international investors identifies a Chinese infrastructure developer that needs capital for a series of projects. They set up an international business company in the BVI as a holding structure and deposit the money, supplementing it with bank loans. The funds are then routed to the Chinese developer and the projects get up and running. Profit travels back to the BVI structure in the form of dividend payments that are distributed among the investors.” 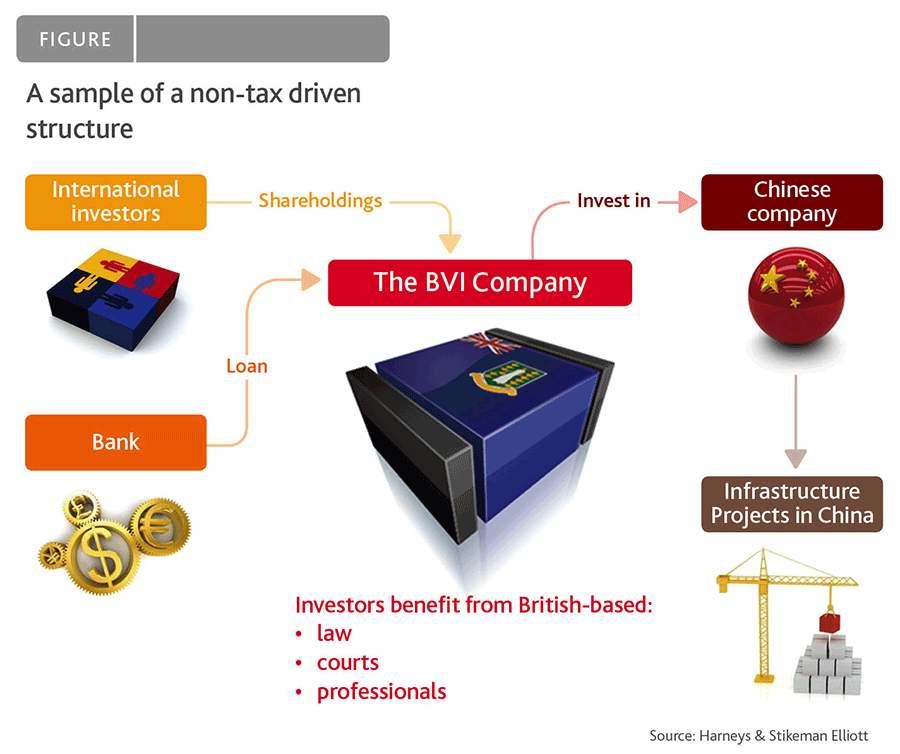 6) How do I incorporate a BVI Company?

To incorporate your own BVI company, a registered agent must apply to the Registrar of Corporate Affairs on your behalf. An easy, simple and straightforward process shown below will be followed:

The registered agent will file a completed application form at the Registry of Corporate Affairs together with:If the Registry is satisfied that everything is in order, it will:

Within one working day of the application being received by the Registry, an ordinary company limited by shares should be incorporated, provided that the paperwork is correctly completed and there is no problem with the name chosen. The company is incorporated with effect from the date specified in the certificate of incorporation. It will have the name specified on the certificate.

The fees for incorporating a company (limited or unlimited) by shares are as follows:

A company will also have to pay an annual fee of the same amount, commencing in the year after its incorporation.

The annual fee is payable:

To partner with a registered agent, please click the link directing you to “Find a practitioner” in our website listing all the currently effective registered agents at the BVI Registry: